The Truth about Removing your Fat! Should You Opt for Liposuction or CoolSculpting?

Imagine this: You’re a 35 year old woman who is 9 months postpartum- your last of three births. You have gained 60 pounds with a good number of stretch marks (love marks as us moms call them) and your breasts are deflated, sagging and much smaller than they once were. You have loose skin on your abdomen, and even though you’re looking great (no one can even believe you had a baby 9 months ago much less two other little ones!), you unfortunately can’t enjoy even one Baja taco without your belly protruding and looking like you’re 6 months pregnant with your fourth child.. which, of course you’re not! 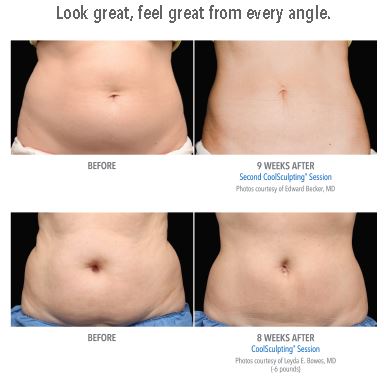 You contemplate a quick internet search on what is available to you. But when you open your browser, what do you search? Liposuction? Tummy tuck? Mommy makeover? You decide on Mommy Makeover and are then directed to an informative blog. Wowza! A mommy makeover includes a lot… maybe too much? How do you know if you need everything included in a mommy makeover? Then you notice an ad for CoolSculpting at the bottom of the page. Your mind continues to wander.

How do you navigate the complicated world of plastic surgery and know what you need, when you don’t even know all the details of each procedure?

At Stephens Plastic Surgery, we are aware of the lack of education available to consumers. It’s important to be educated about each procedural option so you are comfortable with your decision and ultimately, your end result.

Liposuction and CoolSculpting® are two very different procedures that are designed to reduce unwanted fatty deposits. So with both procedures producing the same outcome in the end, how do you decide which is best for you? Like so many things in cosmetic medicine, it depends… there are large differences between the two. It’s crucial to speak to a Board Certified Plastic Surgeon as they’re specialists in both Liposuction and CoolSculpting, and have the necessary tools in their toolbox to make the best decision for you. 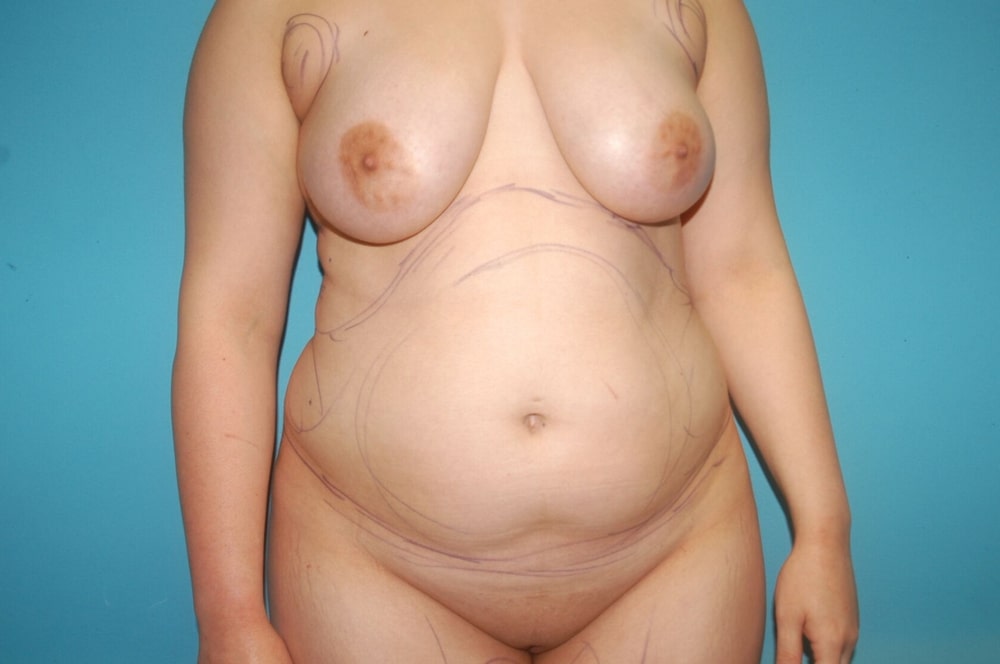 Liposuction was developed in the 1980’s and has been around a lot longer than CoolSculpting. Liposuction is a surgical procedure and can be performed under local anesthesia, under sedation, or full general anesthesia. The type of anesthesia you will need depends on the area(s) to be treated and the amount of fat that needs to be removed. In general, the more areas that you treat, the more sedation or full general anesthesia you will need. The incisions for liposuction are small, typically less than 1/4 inch, so there isn’t much scarring. There is, however, a recovery period that lasts for a few weeks – bruising and swelling are the most common. Patients can usually resume light exercise after a few days. 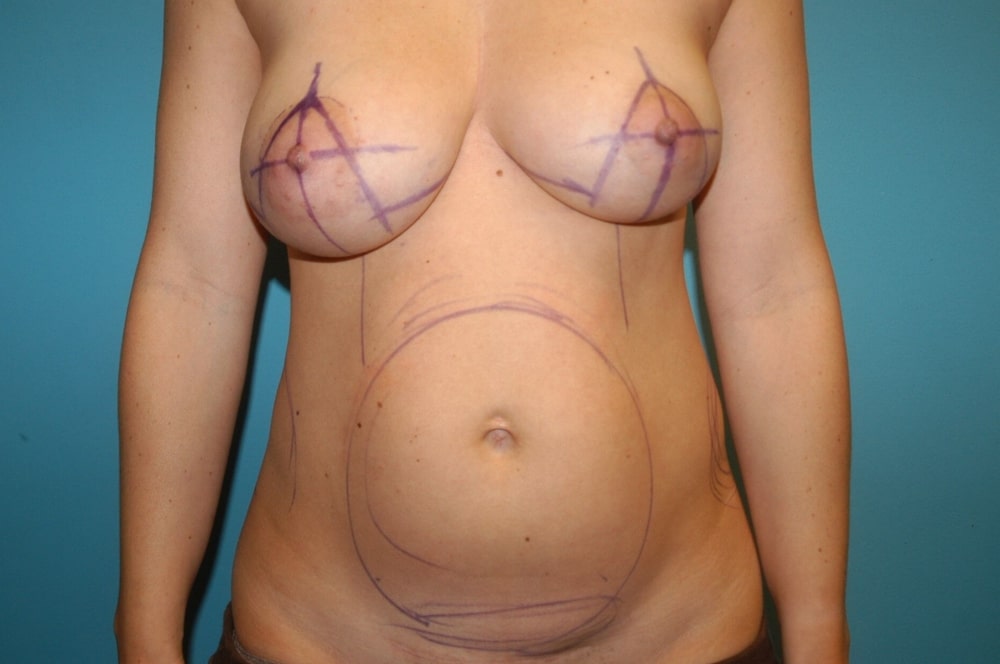 As opposed to liposuction, CoolSculpting® is a non-invasive procedure that doesn’t require anesthesia at all. The CoolSculpting system includes a disposable gel pad that is placed over the treatment area. A cooling head is then placed over the gel pad and suction is activated. The machine has a base that cools the liquid flowing through the headpiece and pulls the fatty area into the head, therefore, freezing the fat. After an hour or so (or two hours for a non-suction treatment type) the cooling head is removed and the frozen area is massaged briefly. Although there can be some discomfort when the tissue is first pulled into the cooling head, this becomes numb once the cooling starts and the massage doesn’t hurt. Like liposuction, it takes a few weeks to see the final result, and although there really isn’t much pain, like liposuction, the treated area can feel a little tender for a while.

Liposuction is the more aggressive treatment of the two, allowing more fat to be removed in a single session. Because CoolSculpting removes less fat per treatment, patients may need several sessions of CoolSculpting to get their optimal results.

Patients who are thinking about other cosmetic surgical procedures may be better candidates for liposuction than CoolSculpting since they would already be under anesthesia. In addition, the combination of liposuction with an excisions procedure (think tummy tuck with liposuction) is very powerful and can deliver dramatic results. Another example of when liposuction is preferable is when a patient might want to add volume to an area and they want to do so with their own fat. Liposuction can be used to harvest fat for fat transfer to another site. Liposuction is often preferred when there are many body areas that the patient wants treated, as these can be done all at one time, rather than over many different sessions with CoolSculpting.

CoolSculpting can be a great option for smaller fatty deposits. It is also a great choice for patients that are keen to avoid surgery, either for personal preference or because of health issues that may increase the risk of surgery. 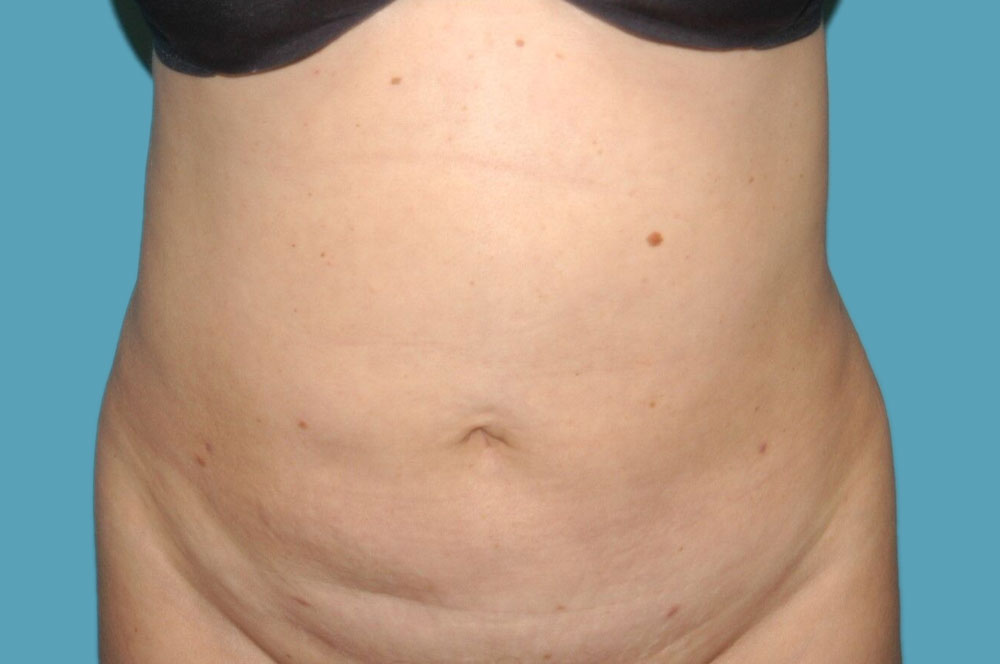 Patients always wonder which is more cost effective – liposuction or CoolSculpting. This is another “it depends” situation. If a patient is treating a single small area that will probably be effectively treated with two sessions, then CoolSculpting makes a lot of sense and may be less expensive, less recovery time, and no scarring. However if there are multiple sites to treat, and some of these will need three or more CoolSculpting sessions to get full resolution, then liposuction may be the less expensive of the two. 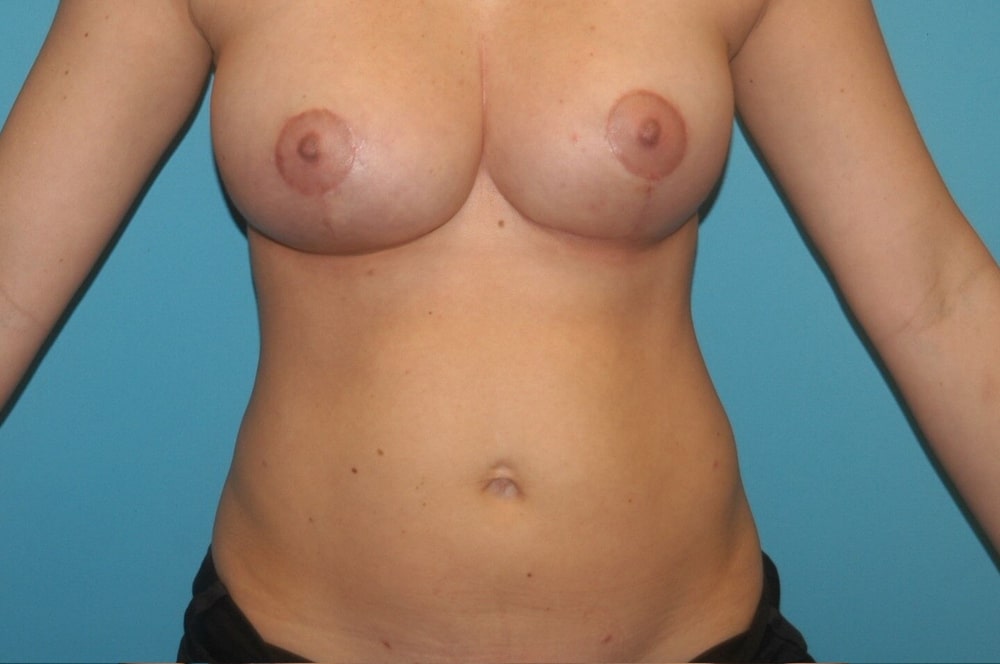 But why are there so many credible resources on the Internet that question CoolSculpting results? Because it’s important to treat CoolSculpting as a medical procedure. Consumers commonly think it’s a “lose weight quick” scheme and view it as a cosmetic transaction, not a medical procedure. Moreover, often times consumers who may not be CoolSculpting candidates consult with a non-plastic surgeon. By doing this, you’re selling yourself short and may be limiting… even eliminating other options. A Board Certified Plastic Surgeon is a specialist in both Liposuction and CoolSculpting (along with other procedures such as tummy tuck), and have the necessary tools in their toolbox to make the best decision for you.

In the long run, the choice of which is best for you depends on you – how you feel about it, what issues are the most important, and how aggressive you want to be in removing the fat. If avoiding surgery is super important to you, and you’ll accept less dramatic results in order to do so, then CoolSculpting might be your best option. On the other hand, if you’d rather get as much fat removed as possible, and would rather do this in one session instead of several, then liposuction may be your best bet. At Stephens Plastic Surgery, Board Certified Plastic Surgeon Dr. Stephens and his team will help you figure out which procedure is best for you.

We have included a graphic to illustrate the comparisons and differences between Liposuction and CoolSculpting: 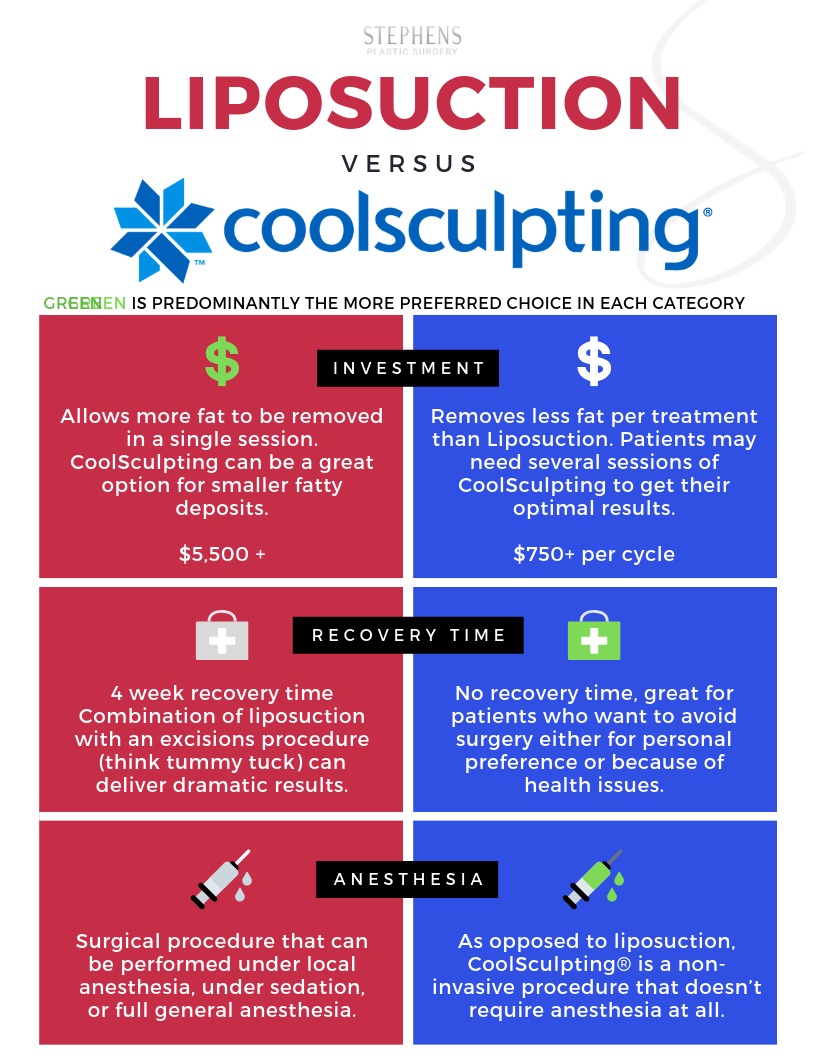 We would be happy to discuss your aesthetic goals and how we can help you achieve them. Share your name and email and a member of our team will follow up with you.

Accessibility: If you are vision-impaired or have some other impairment covered by the Americans with Disabilities Act or a similar law, and you wish to discuss potential accommodations related to using this website, please contact our Accessibility Manager at (225) 767-7575.
Contact Us